Since moving, I have never felt more interested in domestic activities like cleaning and baking.  It might be having a new, fresh apartment with a great big open kitchen – or it could be the cost of prepared items up here, baked goods especially – but I’ve been wanting to try all kinds of new recipes.  This past week, I was perusing a lovely cookbook entitled Canada’s Best Bread Machine Making Recipes by Donna Washburn and Heather Butt.  In it, I came across a section devoted to bagels.  Having never made a bagel in my life, but having eaten probably hundreds of them, I figured that I could perhaps make it through this type of recipe with relatively few injuries.

Now, I don’t profess to be a traditional breadmaker, but I’ll make the heck out of some bread machine recipes.  And so, for the past month or so, I’ve been testing out new bread making recipes like crazy.  I’ve already made some country white bread, some cornbread – which was and still is delicious by the way – and two types of bagels.  Allow me to share my delicious bagel creating experience with you…

First, I usually choose my recipes by what’s in the cupboard.  I’ll go out of my way to make something that requires me to do some shopping if I’m really interested in it, or in a planning mood, but typically when the mood to bake strikes me, I have to find what’s available at the time and go with it.  And so, my first attempt at bagels were…

In order to create these delicious goodies, you will require the following:

Since I don’t drink coffee, and Ian doesn’t use the instant variety, I substituted the water and instant coffee granules for 1 1/4 cups of cold leftover coffee.  This is actually good, since typically breadmaker recipes should not utilize cold ingredients if it can be helped.  However, if you prefer a flavoured type of coffee, such as Irish Cream or French Vanilla, you can substitute that as well.

The breadmaker I use (thanks AC!) requires that the ingredients are placed in the pan in the following order:  liquid, dry, and finally yeast.  Therefore the leftover coffee went in, followed by the sugar, salt, chocolate chips and finally the flour (I used all-purpose).  I created a little depression in the pile of flour and carefully added the yeast, ensuring that it stayed out of the liquid.  If you’re a baker, you know that you don’t want the yeast to touch the liquid until the mixing stage.  If you’re not a baker…well…now you know.  The pan is placed into the bread machine, and the Dough Cycle is selected.  After about an hour and a half, your dough is ready to go…sort of…

Once the dough was ready, I lightly dusted the counter with flour and covered the dough ball with a large bowl.  Becoming dough is hard work.  It needs about ten or fifteen minutes to rest and think about what it’s trying to accomplish.

After its short resting time, I rolled it into a cylinder shape, about 12 inches long.  This will require more practice, since the ends of the cylinder should technically be the same thickness as the centre.  As such, I ended up with some bagels that were smaller than others – but no matter!  I cut the dough into 12 portions.  Then I realized a week later that the recipe actually called for 8 portions.  Oops! 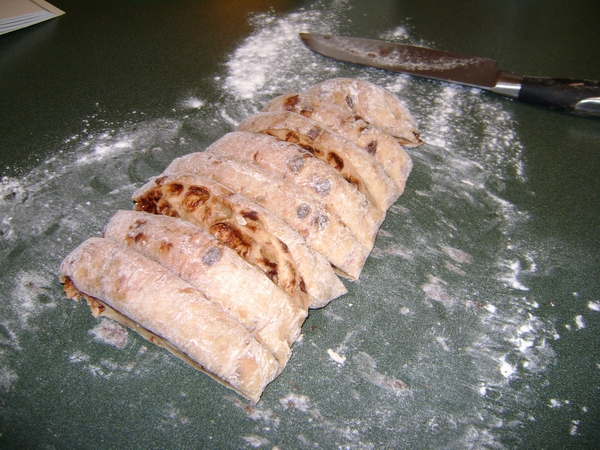 Don't be misled...there are 8 portions here, but 4 bagels were already formed!

Each portion is easily rounded, and I put my thumbs through the centre of the dough to create the bagel shape.  This is also known as the donut shape, but let’s be honest here…donuts are fried bits of deliciousness that are on a level I’m not ready to attempt. 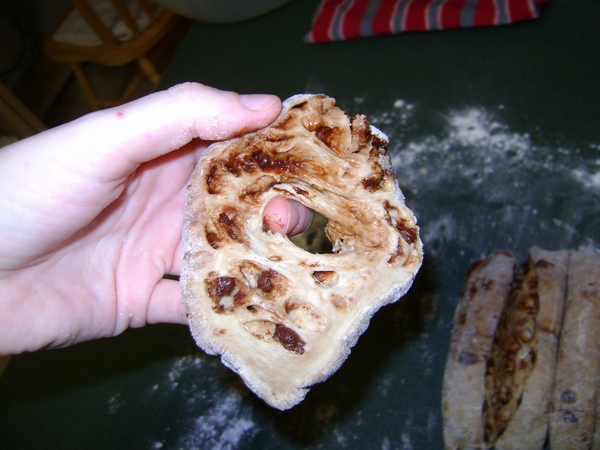 Once all the bagels are formed, they again feel the need to think about life and what they are about to become.  So I covered them with some dish towels (I recommend clean towels…unless you like other flavours in your bagels), and let them rise in a draft-free, warm place for 30 to 45 minutes. 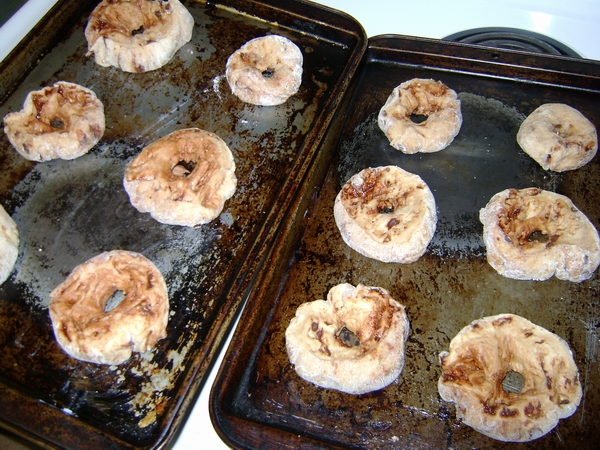 After rising, the bagels looked a little like this… 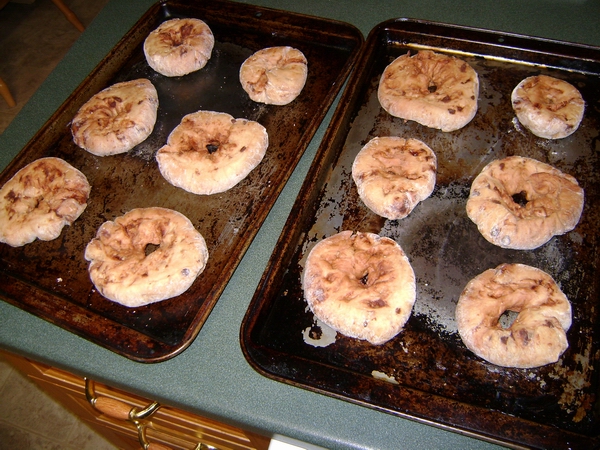 We don't really look that different now...do we?

So while my bagels were considering the meaning of life, I got a pot of water boiling on the stove and added 1 tbsp of sugar to it.  Once risen, each bagel was held under the water for about 20 seconds…one at a time.  I know, I know…cruelty to starch…the horrors!  In any case, the bagels got a wee bit puffy…probably from all that contemplation that led to a torturous bath in boiling water…

Having made sure that my oven was preheated to 400° F, and preparing my baking pans, I baked the bagels for about 15 minutes.  They got a little burnt on the bottom, but then, remember I accidentally overlooked the fact that 8 portions were to be cut, not 12.  Also, my oven seems to bake at a little higher temperature than it should – I think.  So I’m sure 12 bagels could be made, provided you don’t leave the little guys in for so long.  Despite the overdone bottoms, they were still delicious!  In fact, it was even a little tasty because of the burning…you know, like if you char up a nice burger…veggie of course!

The perfect wake up...chocolate and coffee!

The bagels were so good, that we decided we wanted to keep some for a while rather than eat them all up.  The best way to have them ready for when the mood strikes to munch them up is to cut them in half, and then freeze them in a large freezer bag so that they’re ready to be popped into the toaster.  Turns out great every time!

The first attempt at bagels was quite successful, so I decided to give it another go with a different flavour…drum roll…

The technique for making the bagels is exactly the same, so follow the instructions above if you’re attempting these…you’ll need the following:

I used onion powder in place of the minced dried onion, and to give it a little kick, added 1/4 tsp of dry mustard and a Tex Mex mix of cheese that had some jalapeno peppers in it.  What a result!  They turned out fantastically…no burning…probably due to only making 8 this time, and also because Ian jumped ahead of me and raised the baking rack in the oven.  Works like a charm…

I’m definitely planning on trying more of the recipes.  Though, now that I know the formula,  I may get a little adventurous and create some of my own recipes as well.  I’ll keep you all informed of my progress…